ESPOO IS A 50-YEAR-OLD CITY

50 years ago, on 1 January 1972, Espoo became a city. The vivacious middle-aged city is celebrated throughout the year across Espoo in events and gatherings in natural and urban environments as well as in museums and activities. We wish you a warm welcome to our shared celebrations and on adventures in Espoo! We provide ideas on things worth seeing and experiencing but also ask you to tell about your favourite spots. 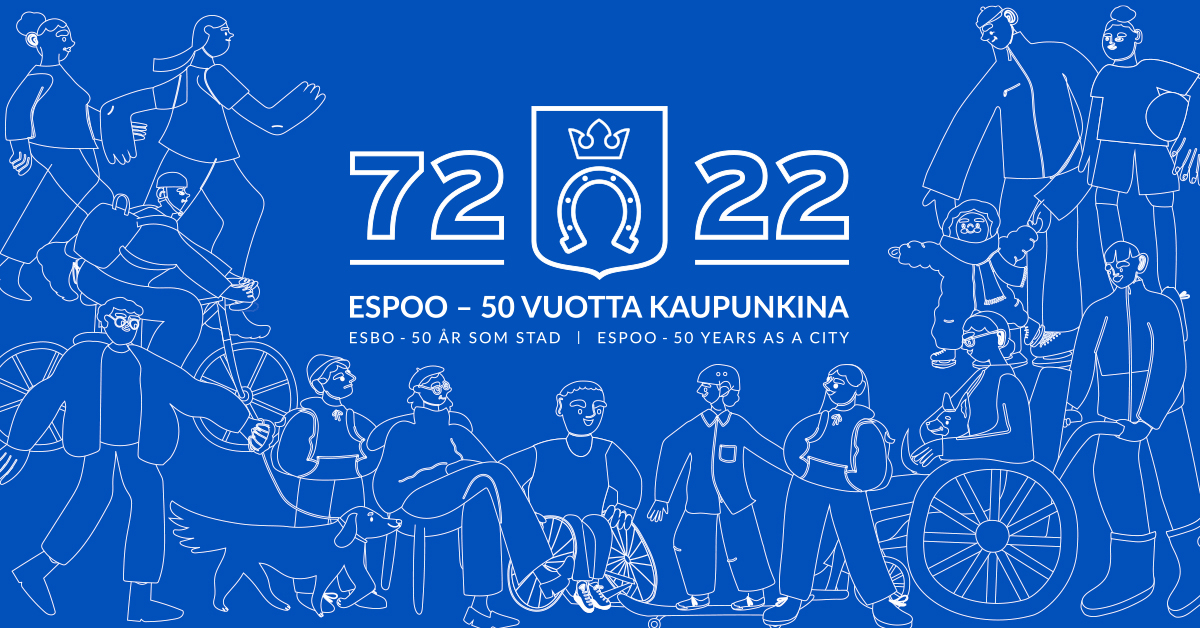 The programme with its fabulous events will be supplemented throughout the year, but it is worth checking out now what’s on the cards. One of the highlights of the year is the Espoo Celebrates! week at the end of August, which culminates in the traditional Espoo Day on 27 August. You get to experience ever more interesting and magnificent exhibitions and events across the city.

This year, we are even more excited by our all-time favourites, April Jazz and the Espoo Ciné festival in August. New museums will open in Tapiola in the spring, and there is plenty to see in the old, familiar places too: WeeGee organises the opening of Mauri Kunnas exhibition in September, and the eagerly awaited Collection Kakkonen exhibition opens in November.

Children and fun-loving visitors of all ages should keep in mind at least the opening of the Museum of Play in the spring, the children’s museum festival in April as well as the Children’s Culture Weekend celebrated in October at different culture centres in Espoo. On the sports front, you get to witness star athletes from Finland and abroad competing on Leppävaara Stadium, and towards the end of the year, Espoo hosts women and youth World Ringette Championships.

ESPOO NOW AND THEN

Are you a current, former or future Espoo local, someone who has travelled in Espoo or one who visits Espoo for work? There are many stories, and we all have our own Espoo tales to tell. You can review your thoughts on Espoo by listening to Kalevauva’s most recent, humorous and playful hit song on Espoo.

The first written mention of Espoo’s long and interesting history is from the 15th century, and in the same century, Espoo became an independent parish until in 1972 when it was declared a city. Espoo’s oldest building is Espoo Cathedral close to Espoo centre, probably built towards the end of the 15th century. The 1950s and ‘60s were the golden age of architecture in Espoo, which is why the city has a number of significant functionalist monuments – works of art by architects from Alvar Aalto to the Pietiläs.

And how did the first New Year’s celebrations organised by the City of Espoo pan out? Apparently very well and merrily: becoming a city was celebrated with fireworks, dances and sausages and was met with drums and church bells as the clock struck midnight. You can find out more about the history and stories of Espoo on the website of Espoo’s heritage society. And you can test your Espoo knowledge on the same website by taking the monthly changing Espoo’s 50 Years as a City quiz.